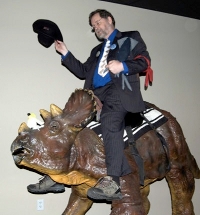 On Thursday 30th June at 8PM GMT we'll be speaking to PZ Myers on the podcast (as long as his schedule doesn't change).
This is great news because Trevor and I are big fans of his work/shenanigans and we're sure our listeners will be excited to hear what he has to say on a large number of topics we'll be discussing.
This does raise some concerns about the live stream; I'm expecting a large number of connections and I'm worried about server bandwidth. The P2P Radio application we use should, in theory, support unlimited connections with no impact on us. However if, at any point during the podcast, I suspect that it is impacting our conference call somehow then I will pull the plug on the stream and you'll just have to listen to it on iTunes like everybody else. Everything will probably work out fine, but I'm just apologising in advance. If you do listen live then you can actually help us out by increasing the bandwidth P2P Radio uses for sharing, thus letting more people listen without using up ours.
We've got a bunch of pressing questions for him, but feel free to suggest some more by commenting here or tweeting us @thinkrant and if they're any good we might use some of them.
Posted by John Stabler at 11:43 AM No comments:

The Myth of Competition - A Rant!

Today the government announces a “shake-up” in Higher Education, promising to give students more choice and “consumer powers”. That’s right folks they are going to bring competition into Higher Education. Again we are being told that competition will deliver a better standard of service and more choice for the consumer - in this case students. If they are planning on bringing competition into higher education, how long will it be before students are faced with prohibitive tuition fees and a two tier education system where the brightest students from poor backgrounds will be consigned to the least impressive universities…? Oh… hang on…
Is anyone able to give an example of where competition has actually succeeded? I work in the deregulated and “open” Energy sector. I use the term open in inverted commas as realistically there is such little difference in the cost of Energy per provider that you may as well stay where you are; that is why when one provider puts their price up, they all do. Not because of an inflated market and companies trying to screw you over, but because they all pay roughly the same for the energy they sell you, and it’s you the consumer who suffers.
What about the railways? Surely there is an example of the success of privatisation and deregulation…? No? That’s right folks we still have to put up with trains that aren’t exactly clean or a joy to travel on, that don’t run on time and due to the private company having to make a profit, are over-priced and I feel, don’t offer value for money. Despite the so called choice I have in a deregulated market I am still stuck with the same rail franchise that is consistently late, on daily basis. So, in what way have I benefited? The same applies with buses, where vital rural services are being stopped because they are not profitable.
How about the Royal Mail? I remember a time when I had two postal deliveries in one day! Now I get one, usually after I have gone to work. So, let me get this right I’m paying more for a service that gives me less? Winner.
For me “competition” usually means a private company offering the least possible service they can for the highest price they can to maintain an healthy profit margin for it’s shareholders and directors. And thereby giving the Government an opportunity to absolve itself of responsibility to its people, under the guise of “choice” being in our interests.
Posted by Steve at 7:19 PM 1 comment:

How could "red" Ed be so wrong?

A response to Ed Milliband’s blog
Wow. I’ve not felt such disappointment in a statement by the leader of Labour party since the removal of clause 4. Whilst I agree with a lot of what he has to say in the post regarding the mishandling of the process by the Conservative led Government, I cannot hide my disappointment and dismay at his criticism of striking teachers.
The Labour party which you lead Ed, may very well “be the party of the parent trying to get their children to school, the mother and father who know the value of a day’s education”; and that is very commendable and I share those sentiments. But when spouting rhetoric, don’t forget that those teachers you criticise are parents. Parents who want to be able to provide an education for their children that is consistent, engaging and world class. Who better than a teacher, who strives at the coal face day in, day out to understand the value of a day’s education?
Unfortunately, with the aggressive tone that has been used by this Government, Danny Alexander leading the way, telling us striking is “a colossal mistake” and that this is the best deal the Government will offer “for many years to come”. The teachers and indeed other members of the public sector have been left with very little choice. It is clear from his tone that actually, there will be no negotiation from the Government. Indeed given the fact that the Government has made so many u-turns on policy in recent months, I’m sure they feel they need to dig their heels in somewhere. This would appear to be that spot. We hear them vilifying public servants for wanting to stand up for their rights. This is fundamentally wrong.
The Labour party and it’s leadership should be rallying around our teachers and giving them the support they need, not criticising them for taking the only action they can to protect their rights. I believe the following replaced clause 4 in 1995:
‘The Labour Party is a democratic socialist party. It believes that by the strength of our common endeavour we achieve more than we achieve alone, so as to create for each of us the means to realise our true potential and for all of us a community in which power, wealth and opportunity are in the hands of the many, not the few, where the rights we enjoy reflect the duties we owe, and where we live together, freely, in a spirit of solidarity, tolerance and respect.’
Before we jump on the populist, poll improving bandwagon, criticising strikes, let us make the difficult decision and remember our roots and heritage and look at that statement above. Let us support our Teachers & civil servants, and make their common endeavour, OUR common endeavour. When we have bankers like Sir Fred Goodwin, who played fast and loose with our money, sitting back and enjoying not only an excellent pension but a golden goodbye payment as well, lets remember the Teachers, tirelessly striving to improve our children’s education.
And a final thought. One of the proposals teachers have before them is for their final salary pension to become an average earnings pension. MP’s currently have final salary provision. Will they loose their final salary pensions in these reforms also? Or is that a little too much like turkeys voting for Christmas.
Posted by Steve at 6:50 PM 6 comments: Lots of apologies this week. I must express sincere regret for:
1. The podcast being late; usually it's available only a couple of hours after the show goes out. However, this week I was tired and busy so you've had to wait.
2. Some audio issues have resulted in a slightly lower quality recording and a couple of minutes are missing from the start. Don't worry, you've only missed my comedy introductions for Trevor Williams and, our special guest, Rhys Morgan, who was kind enough to fill in for Steven.
3. The unoriginal episode title; both Trevor and I are feeling a little uncreative this week.
Anyway, it's still a corker. This week we beat up on the faith healers who were taking money from gullible people in a Newsnight investigation, gay (but celibate) priests in the church, Peter Hitchens not understanding the arguments surrounding the right to die, and Rhys discusses some of the current woo before telling about his new skeptical help forums (more info to come).
We hope you enjoy it as much as we did making it. Download it now!
Posted by John Stabler at 11:55 PM No comments:

Episode 35 - Listen With A Tissue 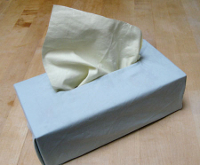 This week we had the live show on Friday because Trevor and John were at an alternatively scheduled Skeptics In The Pub on Thursday.
We discuss Philip Davies' "great" idea to have disabled people work for less than the minimum wage, Trevor has another great Catholic story, Gay men getting kicked out of a swimming pool, lesbians being told off for breaking the 10 commandments, Nadine Dorries as a pin-up (holding down vomit), the cost defence of the faith-healing defence and lots of other crazy stuff. In fact, this week has been so crazy that if harold Camping hadn't had a stroke he'd be out claiming it was evidence for the rapture.

And, as the title suggests, there's a sad story in there which may upset some listeners.
Download it now!
Posted by John Stabler at 10:06 AM No comments: 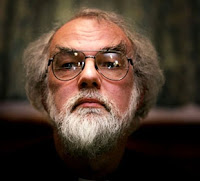 The live stream failed us this week. Just as well we didn't promote it as much as we usualyy do on Facebook and Twitter.
This week we discuss the arch-bish's comments on the current government, reiki healers being put in hospitals, catholic clergy reviewing books, rear of the year, Dolly The Dog, A C Grayling's super-university and What We're Doing This Weekend.
Download it while it's fresh!
Posted by John Stabler at 10:40 PM No comments: 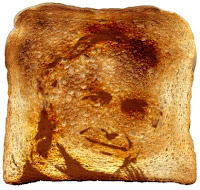 I knew the episode title would get your attention! But it's not simply a stunt because we do actually discuss Dawkins and dogmatism.
This episode is all about religion. Trevor wanted to give it the title "Shadowboxing: Two atheists take on God ...who they don't believe in ... so it's 2 against 0. Apart from when Trev's blood sugar has a wibble then it's 1 1/2 against 0. Who will win the piece of Dawkins toast?" I liked his title a lot, but its verboseness combined with the fact I let him win Guess The Year by default was too much for iTunes to bear.
Anyway, we discuss a range of topics: the harm of moderate religion, the after-life, sophisticated theology, denial of objective truth and solipsism, dogmatic and militant atheism, mocking religion, miracles, whether skeptics can also be believers and a lot of other stuff in between.
Download it now! It comes with an extra 15 minutes of bonus material, just so you get more value for money.

Trevor also mentions a very funny and true cartoon: If God Were A Car.

Thanks to Chris 'Mitch' Mitchell for the awesome Dawkins Toast image
Posted by John Stabler at 10:42 PM No comments: